Hope For People Diagnosed With DID

A Gentle Approach to Psychotherapy With People With DID

Many present psychotherapy techniques ask clients to look at the complete traumatic event which includes the event itself, the emotions this event brings out, where these emotions are stored in the body, and the negative cognitions that were instilled when the event happened. This is a lot to face all at once and can lead to retraumatization in some cases. With DIDs, they have the option to switch to another part, if the therapy becomes overwhelming and they very often do the switch.

Let’s look at an example of what a traumatic event might look like from this perspective. Say you did not get any brownies when you were a child. Everyone else at the table was given brownies, but you were told: “no brownies for you.” So this is a traumatic event. Now you might be angry about this and feel the anger in your fists. In addition, you may feel hurt and sad, sensing these feelings in your stomach and heart respectively. And the most damaging element of trauma is you start to have negative beliefs about yourself – “I am too fat. I am worthless. I am unlovable. There is something wrong with me.”  Then you start to collect incidents that support these beliefs and feel worse and worse about yourself.

Gentle Reprocessing™ was developed to break these four elements of trauma down into manageable bites. It further uses metaphors in the form of guided imagery, drawing, and/or storytelling to help a client release the negative thoughts, emotions, and body sensations. Once this is done, the trauma becomes neutral and feels more like an old movie, it happened a long time ago or it happened to someone else.

External Gentle Reprocessing or EGR was created after it was discovered that Internal Gentle Reprocessing (IGR) did not work well for very young children or fragile clients. Any client who could not tolerate touching their trauma even for a short time would be considered a fragile client. Fragile clients would include war veterans, energetically sensitive people with DID, among others. This technique should not be used with ritually abused people with DID. It can have a detrimental effect.

People with DID, as was already mentioned, when a part gets too close to trauma, they switch to another part where it is safer. This makes it very difficult to do any ‘therapy’ with the most troubled parts. It has been found that EGR is gentle enough to keep a part engaged long enough to release some of the trauma for these damaged parts. Once these parts start to heal, the whole system benefits. It must be emphasized, that EGR should not be used until the basic work, such as, establishing trust with the therapist and mapping the system has taken place. But once this is done, EGR has proven to an excellent tool to help clients really start to heal on a deep and meaningful level.

So how does External Gentle Reprocessing work? Clients are asked to draw a line down the center of a blank piece of paper. On one side they draw a picture of how they see themselves when they think of the traumatic event and on the other side, they draw the emotions and/or thoughts they have when they recall the event. Once this is done, the paper is cut in half on the line. The self-portrait is put aside and the negative thoughts and feelings are ‘erased’ with a black crayon or marker while positive cognitions are repeated. When the paper is totally blacked in, the clients tear or cut the paper into little pieces and throw it away. At this point, the clients are asked to tell an empowering story about how they defeated the negative ‘monster’ feelings using bilateral stimulation. When the story has been repeated several times, the first step of drawing is done again. This may seem to be a bit far-fetched. But the truth is it works. It seems to keep the clients occupied enough to allow the trauma to melt away when they are not looking. Usually, the second set of pictures are much more positive and the clients report feeling much less triggered by the event.

One example of the before and after self-portrait drawings of a client with DID showed a little girl in bed with her teddy bear. It said, ”No eyes open”.  She is very withdrawn. The second picture, in contrast, shows the same little girl, but she sees herself shaped like a big heart sitting in a tree feeling literally heart-centered. The tree was her place of power in the work she did. This client also reported she felt much better and the whole system seemed to benefit from this part starting to heal. 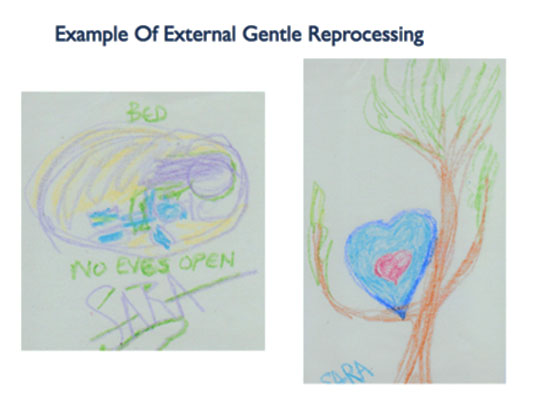 The difference between these two pictures is not an isolated incident. With many parts, it does take a while to do this process with all of them. This is not complete therapy for people with DID, but is designed for the clinician to use it as needed as she/he works with a client with DID.

More information about Gentle can be found at www.GentleReprocessing.com  If you are interested in your therapist doing this work with you, an online class can be found under workshops on the site.

Diane maintains a private practice in Central Massachusetts. She enjoys creating new and innovative ways to work with her clients, which led her to develop Gentle Reprocessing™. Diane has been teaching Gentle Reprocessing in workshops throughout New England, including Boston University, since 2001.

I would like to thank Sara (not her real name) for her wonderful drawings and for giving permission to use them and her stories in this article.

OUR GIFT TO YOU: External Gentle Reprocessing Workshop
(AKA Slaying the Monster)

Thank you for your interest in receiving our news updates!

Gentle Reprocessing™ is a complete therapy made up of a unique integration of guided imagery, drawing, story telling, inner child work, cognitive therapy and EMDR components, among other proven therapies.

For psychotherapy, workshops and other business or media inquiries contact by email to:
dspindler@gentlereprocessing.com