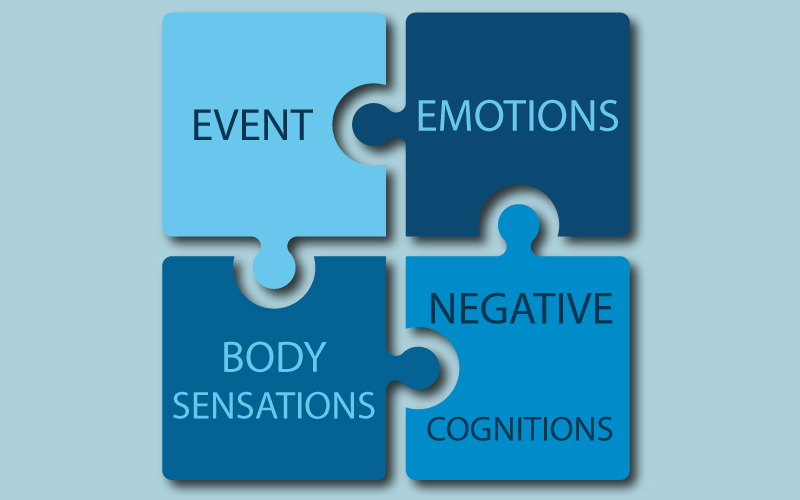 Trauma is stored in four different ways in a personʼs system; the actual event, the emotions around that event, the body sensations where these emotions are stored and a set of negative beliefs attached to the event.

So if the event was a car accident, there may be terror all over his body, anger at the other driver in his fists, and anxiety in his stomach around the blood. On top of all that he may begin to think “that this was my fault, I am unsafe and can die at any moment, the world is unsafe.” From that point on, the client starts to see the world from this perspective – an unsafe place where a mistake by him can end his and possibly others lives. He starts to act accordingly to try to control his environment and keep himself safe. And along with that comes all the emotions and body sensations that accompanied the car accident, that he now needs to keep from coming up to the surface (more on that in a later post).

So three things are happening in the client he may not be aware of – his emotions are being hidden from him, these emotions are stored physically in his body and his view of the world has been altered. He may not pay attention to the queasy feeling in his stomach (anxiety) whenever the weather is similar to the day of the accident. Therefore, the client begins to carry a low grade memory of the accident in his body in the form of increased stomach problems that will continue until the trauma is addressed. His view of his world has changed – he no longer feels as safe as he did before the accident.  But, when the client is reminded of (triggered by) the event, the anxiety and where he stored it in his body grow stronger.  This supports the thoughts that his world is not safe.

Trauma takes place when these four components – the traumatic event, emotions and body sensations around the event and the beliefs about the event are not processed properly in our brains. A look at what that means next time.

OUR GIFT TO YOU: External Gentle Reprocessing Workshop
(AKA Slaying the Monster)

Thank you for your interest in receiving our news updates!

Gentle Reprocessing™ is a complete therapy made up of a unique integration of guided imagery, drawing, story telling, inner child work, cognitive therapy and EMDR components, among other proven therapies.

For psychotherapy, workshops and other business or media inquiries contact by email to:
dspindler@gentlereprocessing.com